Looking for a Damp-Proof Course membrane in France! 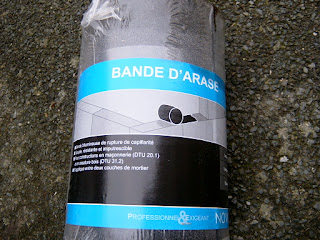 Although I am French, I do not know ALL the DIY terms in French!

A few days ago Chris was looking for some DPC which I found out means ‘damp-proof course’!

Thankfully we had a bit of it that our friend gave us so it helped going round some DIY shops in Dinan (Brtittany, France). At least we could show what we were looking for!

Most of them looked at the stuff in a funny way and asked us what it was for, then said ‘NON’!

After visiting several DIY shops, at last we found some damp-proof course membrane at Point P in Dinan and found out it was called ‘bande d’arase’ in French. They sell 10m-rolls, either 20 or 25cm wide, at just under €20 per roll.

See my future post to see what we will do with it!