Mardi-Gras and Carnaval in France 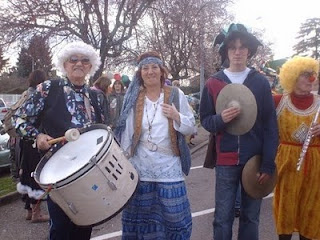 Mardi-gras is French for “Fat Tuesday” also known as Shrove Tuesday in England. It refers to the practice of the last night of eating richer, fatty foods before the ritual fasting of the Lenten season, which starts on Ash Wednesday.

Rich and fatty foods include gauffres (waffles) and crêpes (pancakes). Brittany being famous for pancakes, you must eat pancakes for Mardi-gras! Both eaten with some nice home-made jam of course! See my future posts about how to make jam.

Where I come from – Lyon – we make Bugnes. See this link for recipes here.

In France most villages organise a Carnaval for children. Often a music band takes part in the celebrations making it more joyful. Everyone then join the parade which always ends up in the village hall (salle des fêtes) where the entertainment keeps children amused for a couple of hours!
Posted by Unknown at 20:48