I am organising a play on Saturday 23rd April 2016 à 8.30pm at the Salle Jean de Beaumanoir in Evran.
The comedians are coming all the way from Paris for one night only!
I personally saw the play on Boxing Day near Lyon and enjoyed it very much.
Although the comedy is in French, it is very visual so even with basic French you should follow easily.
It is the story of a barking family. The father thinks he is the reincarnation of Elvis Presley, the son Michael Jackson. The mother drinks whatever she finds!
They decide to enter a lookalike competition in Las Vegas but they can’t afford the price of the plane ticket. They will do anything to raise the money....... they would even steal from their own family.

I promise you an evening of laughter! :o)
The money raised will go to ‘The Evraneurs’, an association in Evran to buy music equipment (amplifiers, microphone etc). They have been playing and entertaining people in and around Evran for 18 months for free. They deserve a bit of financial help!
Tariff : 10 euros / 12 euros on the night if any tickets left. 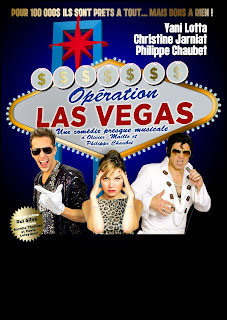