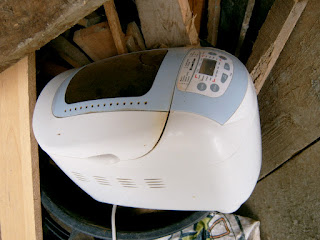 Mine is out of order, as you can see it is on the recycling pile in the shed, ready for the déchetterie!

I have been making bread for 15 years now and i hardly go to the bakery to buy fresh bread.

I do like to treat myself to a fresh baguette but Chris and I always end up eat a whole baguette at once!!

One of the paddles on my breadmaker had been playing up for a few months and Chris tried to fix it. Unfortunately he took the paddle off and broke the seal, so it would have leaked!

I am hoping to find one tomorrow in Dinan. Lidl had an offer on a couple of weeks ago. That will do! This one lasted me over 6 years and came from Lidl too.

My previous bread making machine was a LG and didn’t last longer. It costs 3 times more than the Lidl one though!

Let’s hope one breadmaker is still there waiting for me!

There are 2 Lidls near Dinan, one in Quevert and one in Taden.